"Rebuild," is a ballad, a metaphor song that compares the biblical story of Chanukah to our current world in which we need to rebuild after a period of fighting. It is not outwardly political. It does, however, reflect the current exhaustion we all feel.

ABOUT THE SONG - (Chanukah, December 10) 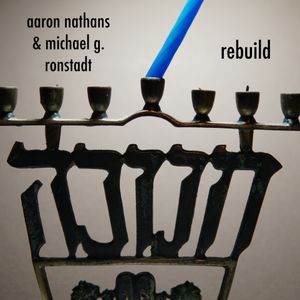 The candelabra’s covered/in melted wax of many colors
The debris of hopes we had for a good year
My blessings burned into the vapor, went up like fire in paper
But I’m still here, we’re still here

Once our fathers built a temple/where the righteous would assemble
And they had a line that went direct to G-d
But the idolators invaded/And our walls they desecrated
And hope was gone, hope was gone

My finest china's broken/and the air is full of smoke
And my flame is burning low
But no matter how far down I’ve fallen, I can bounce of the bottom
It's the only way i know

Be gone, this angry grammar/It’s time to lift a hammer
My holster’s got a measure and a drill
We light these candles to remind us/That our work is not behind us 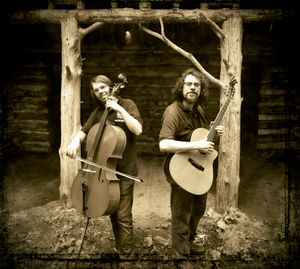 Their new single "Rebuild," is a ballad, a metaphor song that compares the biblical story of Chanukah to our current world in which we need to rebuild after a period of fighting. It is not outwardly political. It does, however, reflect the current exhaustion we all feel.

“Rebuild” does not appear on Aaron Nathans & Michael G. Ronstadt’s new critically acclaimed album "Shadow of the Cyclone," which was released October 1, 2020.

With sobering clarity, the duo weave intricate metaphors in the form of fallen saviors (“Strongman”), a Leonard Cohen-esque embrace of the anti-hero (“I Go Low”), and straightforward accounts of our loss of empathy (“Sinner’s Bible”). These songs hint at a sense of just retribution for the troubles we’ve brought upon ourselves, while “Haunted House” and “Come on Sun” coax a sense of levity and hope while accepting our brutal present.

As an acoustic duo, the two create a compelling musical palate. Ronstadt’s cello lines are reminiscent of the live-layered magic of Zoe Keating, and his songwriting reflects the creative diversity of Paul Simon. He weaves intricate patterns around Nathans’ baritone voice, studied folk meters and dash of irony in the tradition of David Wilcox and Dar Williams. As multi-instrumentalists, the two play a total of 33 distinct instruments between them while Serenity Fisher guests on piano and vocals, Stan Ginn on drums, Phil Henry on backing vocals and percussion, and Ciara Grace on backing vocals.

“Shadow of the Cyclone” brings in fans of folk, Americana and singer-songwriters who are seeking refuge from the storm that 2020 has unleashed on us.