Trespass Music is pleased to release Karen Morand & The Bosco Boys new single "Coffee" to worldwide radio on September 1, 2021. The new single is the third of 4 singles released in advance of the upcoming album "Ghost Hotel" due out January 2022. 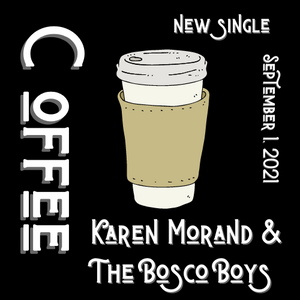 “Coffee” came hot and fast while singer-songwriter Karen Morand traveled through Hamilton, Ontario, the birthplace of Canada’s iconic coffee spot, Tim Horton’s. With its back porch, bluegrass bounce and catchy tune, it’s sure to stick with you over your next morning’s cup of Joe! Karen and the Boys are proud of their collaboration with boutique coffee roaster, 14th Coffee Co. as they launched their “Bosco Blend” in August 2021.

Award-winning singer-songwriter Karen Morand follows up her latest single releases "Easy" and “Never Enough” and her solo release “Every Flash of Light” (2018) with the third of 4 new singles releasing in advance of her January 2022 album "Ghost Hotel."
Karen is accompanied on COFFEE by Aaron Verhulst, Benny Santoro, and special guest Max Marshall.

In concert, Karen performs original songs spanning her four album releases, alongside folk classics and new favourites from her songwriter friends. She appears live both as a versatile soloist and accompanied by the Bosco boys.  Since her first studio release, 'Carry On' in 2012, followed by 'I Think I'll Lose My Mind Today' in 2014, and 'Junkyard Heart' in 2016, Karen has maintained an intense schedule of performances throughout Canada. Karen has brought her music to eclectic backdrops including inner-city churches, stages tucked deep into the Ontario forest, classrooms, living rooms, and concert halls.

"Never Enough is the kind of modern folk track that will really grab ahold of listeners and, in the words of Morand herself, “[break] their heart a little and [put] it back together“. This is high-level songwriting executed with clear musicianship that allows each piece of this track to come together to form a true musical masterpiece. Karen Morand & the Bosco Boys are creating the kind of folk-rock music that this genre could use a whole lot more of – meaningful, genuine, and from the heart at every measure." The Ark of Music

"Karen Morand is something of a standout in the crowded field of solo singer-songwriters. Her performances and recordings both display a careful attention to craft as well as a broad range of influences. Karen’s material demonstrates her comfort with a variety of styles and genres and her ability to create appealing melodies and lyrics."  Danny Sullivan, Artistic Director, Blue Skies Music Festival